Hey everyone! I hope you all had a great Thanksgiving! I have a big update to give you of all the movies I’ve been watching lately. The awards season is upon us so I’ve been trying to get as many of the screeners/popular films watched as possible. I tried to write full reviews for as many of the films as possible but I ran out of time so that means it’s time for some mini reviews!

I am not a Bergman expert (I’ve actually only seen one of his movies The Seventh Seal which I reviewed for Blind Spot a few years ago). I am sure fans of Bergman will enjoy this film even more than I did but I still thought it was a good watch. Tim Roth and Vicky Krieps play a writing duo who go to the island where Bergman shot his movies for inspiration. While there she tells him the story for her new movie which we see played out with Mia Wasikowska. I may like the movie within a movie better than a movie but the script was quippy and fun and everyone had good chemistry. A movie made for cinemaphiles.

I’ve noticed critics slightly older than me are really hyping up this movie. It definitely has that nostalgia for a time and place that will appeal to people who lived in that time and place. All that said, I still enjoyed it. It’s a meandering slice of life type of story that relies on its characters to get you through the film over the story. Fortunately, for the most part the characters are engaging. Alana Haim is great as the Jewish young adult who becomes friends with a teenage boy played by Cooper Hoffman. He’s only 15 but he seems older as he owns several businesses throughout the film and works as a teen-star on a show. Some parts felt a little played out like most of the goings-on involving his waterbed business but I loved everything when she is working for a local councilman’s campaign. It reminded me of Dazed and Confused but without Linklater’s snappy dialogue. Licorice Pizza isn’t a classic but it’s worth watching 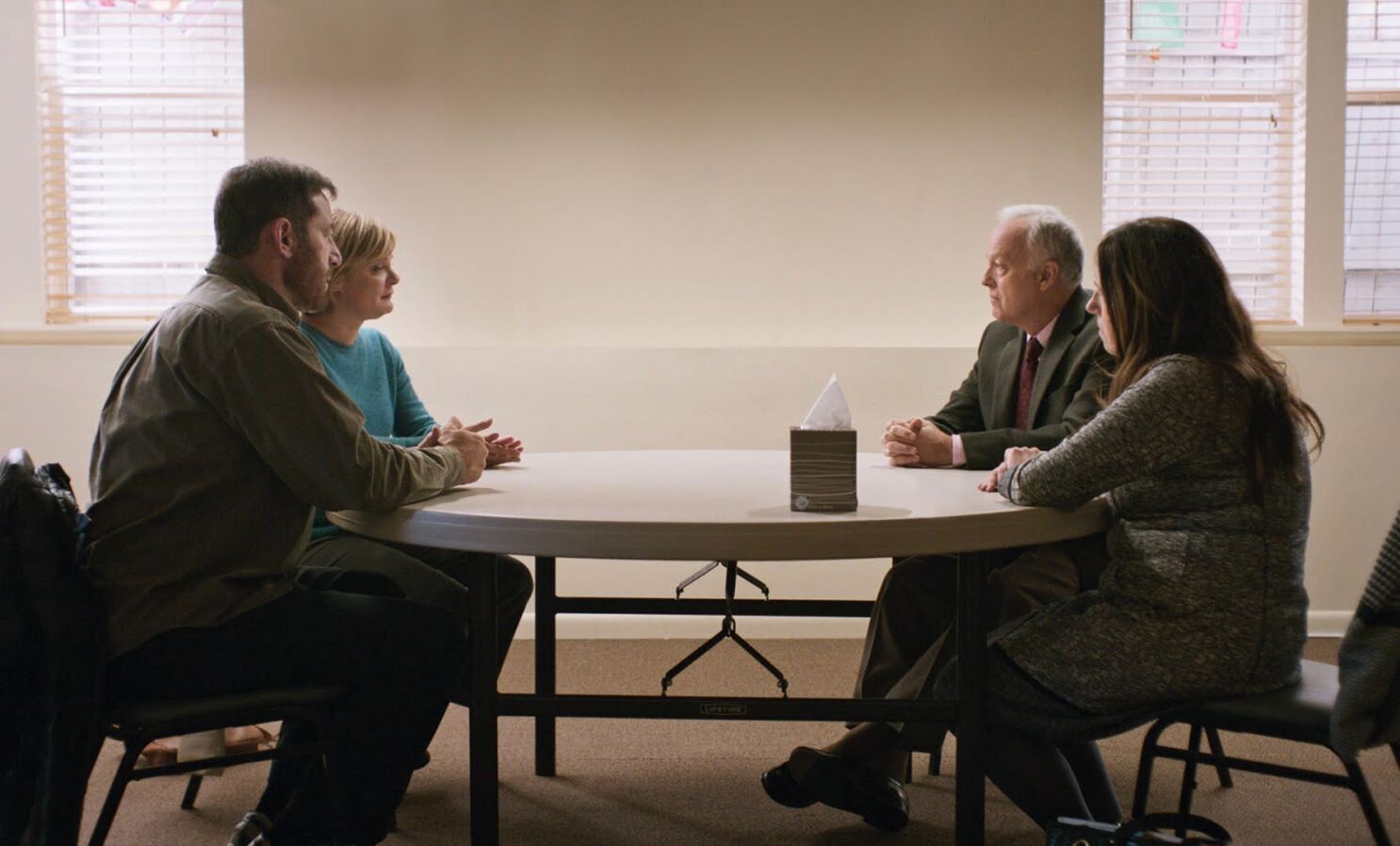 There are certain movies that are very well done that I have no desire to ever watch again. Mass is one of those films. It is a simple movie which feels more like a play: 2 couples sitting in a room talking about their departed children. However, in this case one son is a school shooter and one was his victim. All 4 actors are exceptional especially Ann Dowd and Martha Plimpton as the 2 mothers. It’s extremely intense and brutal but there is hope at the end. At almost 2 hours it’s a bit exhausting but I’m glad I saw it.

The Hand of God

The Hand of God is a movie that tries to do what Licorice Pizza does but without as much success. It’s a slice of life coming of age story about an Italian boy in 1980s Naples. Like Licorice Pizza, it’s full of little vignettes of the young man growing up but they aren’t as charming or engaging. I honestly felt like I was watching Italian people amble about for over 2 hours. The account of Fabietto losing his virginity was especially strange. It is beautifully filmed by Paolo Sorrentino but there are so many better movies that conquer the same topic that this one is a skip.

This summer I heard a lot about Pig from my friends but for some reason I didn’t think it would be something I’d like. It just felt weird. However, now I have seen it and to my surprise I actually enjoyed it! Pig tells the story of a reclusive chef turned truffle hunter who goes on a quest to find his stolen truffle pig. These pigs can be very valuable but that’s not why he is on his mission. He’s searching because he loves the pig and misses it, which is sweet and more endearing than this movie had any right to be. I will probably select Nicolas Cage for my actor nominations I am voting for. He’s great and the movie is a winner.

Extinct is an animated film I kept hearing about but it seemed like it would never actually get released. Now I’ve seen it and it’s…fine. The animation and the story are serviceable and the voicework is all well done, but there’s nothing exceptional or memorable here. The film is extremely exposition heavy. In particular the villain has a monologue at one point that goes on for at least 10 minutes and then we don’t see him again for until the end of the movie. Extinct isn’t actively bad but just bland and forgettable.

Next up we have newest take on Shakespeare’s most disturbing play, The Tragedy of Macbeth directed by Joel Coen of Coen Brothers fame. I am not a Shakespeare expert so I can’t tell you what they left in or took out in this adaptation, but all the main moments are there. The acting is excellent by Denzel Washington, Frances McDormand, Brendan Gleeson, Corey Hawkins and more. The whole movie was shot in black and white in a castle with seemingly cement walls surrounding it. The use of shadows and lighting is very effective in creating an almost silhouette motif to many of the shots. I can picture this version being used in high schools in coming years to come. Excellent

I am not the biggest Illumination fan but I didn’t mind the first Sing movie and I loved the soundtrack. Now we have the sequel and to my surprise I didn’t mind it either. It’s no masterpiece but it’s a pleasant animated film with another great soundtrack. In this sequel they take our troupe of singers to a Vegas-like city to try out for a show run by mogul Jimmy Crystal. The housewife Rosita (Reese Witherspoon) is still my favorite character (you don’t see many Mothers with their own character arcs in animated films. I like that). The story in Sing 2 definitely takes itself way too seriously and gets bogged down in heavy themes of depression, discouragement and rejection but I still overall enjoyed it and especially if you love the music you’ll have fun with it.

The Worst Person in the World

In another coming of age story this film is about a young Norwegian woman who decides to study psychology and become a photographer. She begins to date an older man who has a successful comic-book series called Bobcat. The best part of this movie is the chemistry between Julie (Renate Reinsve) and Aksel (Anders Danielsen). They have an age gapbut they fit well together and you are rooting for them as a couple. This is a pretty strong R rating but if you are up for this kind of story you’ll enjoy it.

Most of the Christmas movies I watch for Hallmarkies Podcast are TV movies rather than feature films but occasionally we get a film that could be released in theaters like 8-Bit Christmas. This film has a great cast and while it borrows from many other holiday films (especially A Christmas Story) I found it to be a charming and sweet film. I loved Winslow Fegley in Timmy Failure: Mistakes were Made last year and he’s great in this as well. All the kids are excellent (which is important as they are the main characters). Neil Patrick Harris is charming as the narrator (telling his story much like the narrator in A Christmas Story) and most of the humor and heart works. I can picture this becoming a holiday favorite for families looking to remember Christmas in the 80s like A Christmas Story did for the 40s.

House of Gucci I won’t log on rottentomatoes because I didn’t get to see the last 20 minutes. I was evacuated from my theater because of a fire! It was pretty surreal. All the sudden a loud siren started going and then the speaker said ‘this is an emergency. Please exit the theater’. So we made our way out of the theater and then were sent home. No end to the movie for us! From what I saw House of Gucci was mostly fun. I liked the camp especially from Lady Gaga. It’s definitely over-long and I’ve heard from others the ending isn’t good (but isn’t it based on true events so maybe they had no choice?). I’m not dying to find out how it ends so I guess that says something but maybe when it comes to a streaming service I’ll finish it off. Jared Leto gives a very strange performance.