I learned something going to the latest Pixar movie Lightyear. (As a critic you need to keep learning, growing and expanding your idea of what makes a great film). I realized a film can have a very questionable concept and premise but if it is executed with enough panache and good spirits I don’t care. A talented filmmaker can take a convoluted and jumbled premise and make a compelling film. Likewise a poor filmmaker can take a simple premise and execute it into a big mess (Superman 4 comes to mind).

I have had many a Pixar devotee explain to me the concept of this movie. Evidently in the world of Toy Story there was a movie about a space ranger man named Buzz Lightyear (at first they said this was a true story in that world but that has clearly been abandoned given there are aliens and evil Emperor Zurg appears). This film was evidently the Star Wars of the Toy Story world and young Andy was a big fan (he was 6 at the start of the first film which is pretty young but we’ll go with it).

The Lightyear movie (which we get a title card to at the beginning saying this is the movie Andy watched) was so popular that like Ghostbusters and Robocop it spawned an animated series in 1995 (ala Saturday morning cartoons). Then the animated series inspired the doll which Andy got for his birthday and it proceeded to ruin Woody’s life. That’s why in this movie there aren’t many of the catchphrases or Tim Allen’s voice (Chris Evan’s plays Buzz here, which I still think it is weird because most animated series still use at least soundalikes for the live action characters).

Anyway, all that explanation helps us get started with the new movie Lightyear. I definitely think it is a risk to present a new version of a beloved character like Buzz (think Runaway Brain with its horror version of Mickey Mouse which upset many people), but my friends tell me it won’t be a problem for the average moviegoer so who knows? I guess we will see.

So after explaining all that nonsense how is the actual movie? To my somewhat skeptical surprise it was an enjoyable space adventure. As distracting as all the Toy Story connections are, the core story and characters are fun and the animation is terrific. 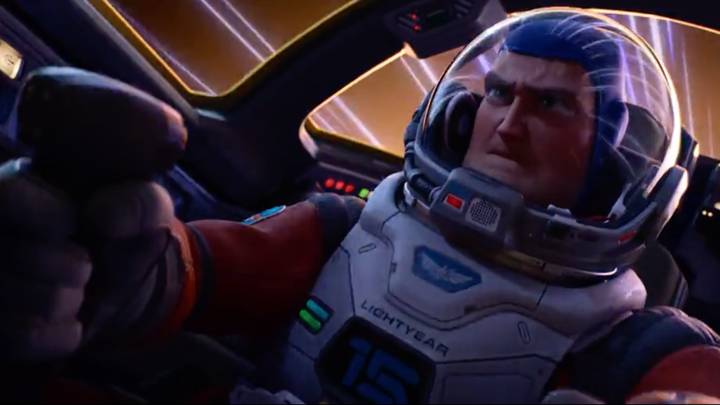 The story takes Buzz Lightyear space ranger- human person, onto a distant planet where a group of explorers are trying to get back to their home planet. Buzz has a group of ranger friends including his best friend Alisha (Uzo Aduba) and a robotic cat named Sox (director Peter Sohn). We also get to know a pen-obsessed ranger Mo (Taika Waititi) and an older ranger named Darby Steel (Efren Ramirez).

I won’t give any more spoilers but Buzz goes on his adventures and the passage of time takes its toll on all of the characters. Similar to Up we get an emotional montage at the beginning involving one of the characters that is moving and lovely. We also have tons of fun with Sox who is destined to go down as one of the great Disney cats (I wrote a whole history of Disney cats a few years ago so I know!). Even if kids don’t get the convoluted concept they may like Sox enough to enjoy Lightyear regardless.

There are parts of the story in Lightyear I didn’t love. The villain felt strange and heavy-handed, which I didn’t care for. Also it’s only 105 minutes but it felt long in spots. I wasn’t with kids when I saw it but I can imagine especially young kids getting fidgety in sections.

Like I said, I went into this film skeptical. The trailers hadn’t impressed me, and I still think the concept is a reach. But the wizards at Pixar worked their magic and managed to win me over. I kind of wish it was an entirely new franchise without all the distractions but we’ll see how audiences respond. I recommend seeing it on the IMAX if possible. The animation is gorgeous and deserves as big a screen as it can be seen on (especially since the last 3 Pixar movies haven’t gotten that consideration it feels extra special).

If you enjoy what I do please consider supporting at patreon where you can get tons of fun perks. https://www.patreon.com/hallmarkies